The latest version of Apple’s iPhone and iPad software promises better battery life, a smarter Siri and true multitasking – but does it deliver and is it worth upgrading?

The first thing you notice when you fire up an iPhone or iPad after installing iOS 9 is the lack of newness. It looks like iOS 8, it feels like iOS 8 and behaves like iOS 8 – the changes are subtle.

For instance, I didn’t notice until a week in that the type face had changed. The whole operating system uses a new “San Francisco” typeface instead of the traditional Helvetica.

First introduced with the Apple Watch, San Francisco promises to fit more on-screen. It does precisely that but it’s a blink-and-you-miss-it change, as is the fact that Passbook is now called Wallet.

Notifications within the pull-down Notifications Centre are now in chronological order too, which is much better, and can be cleared individually or by the day, but there’s still no “clear all” button. 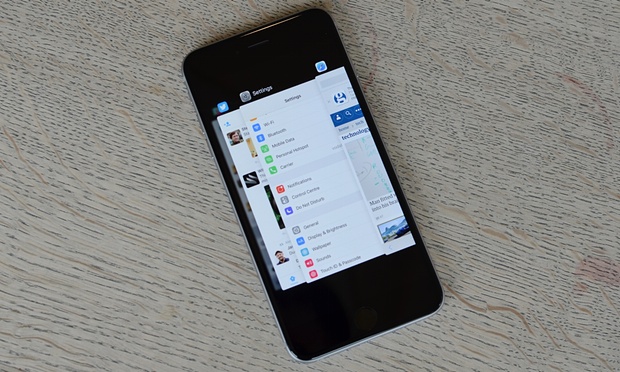 The running app cards are bigger, making it easier to see what’s happening before tapping into an app. Photograph: Samuel Gibbs for the Guardian

One of the bigger visual changes is within the recently used apps switcher. Double pressing the home button brings up cards that are bigger, so you can more easily see what’s going on before tapping into an app, while location-based apps or apps that have been triggered from a Mac or iPad using “hand-off” are there too – an obvious improvement.

A couple of Apple’s apps have been improved too. The Notes app now supports drawing and photo insertion, though only if you use an iCloud account to sync them. 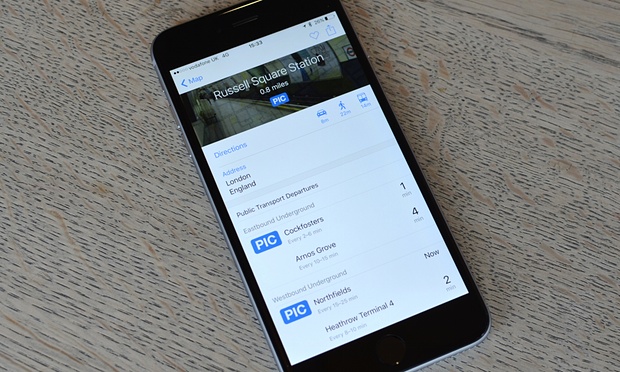 Apple Maps also has public-transport directions, but is still not as good as rivals Google Maps or Citymapper. The phone app will try and identify unknown callers from your email, or give a rough location based on the number, which it did for me as it could never find the number in an email for anyone who wasn’t a contact.

Apple’s News app will also launch with iOS 9 (but not in all markets), bringing headlines and stories from a collection of news sources.

The Apple keyboard is also much easier to use now that the keys are not always capped up. Pressing the shift key raises or lowers the case of the keys so that it is much easier to see whether you’re about to punch in a capital or lowercase letter. Swiftkey and others have had this feature since iOS 8’s launch.

The keyboard will also display cut, paste and text formatting keys in some apps, which are useful – although the iPhone often needs to be in landscape orientation for them to show up. 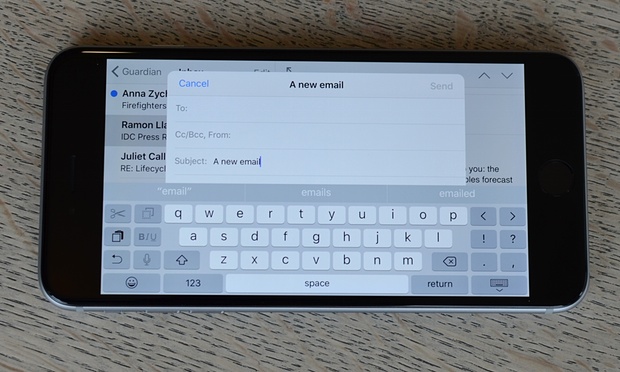 Two-finger cursor control is also available, which uses the keyboard as a giant trackpad; I found it more trouble than it was worth.

The biggest feature addition for iOS 9 is Siri’s new “Proactive”, which is essentially Apple’s take on Google Now. 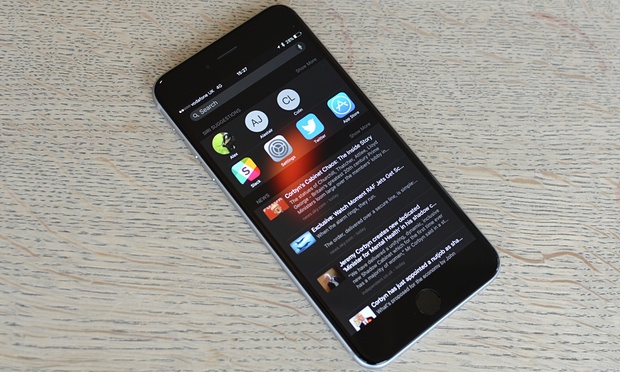 Siri’s new powers include surfacing apps and contacts it thinks you will want access to due to the time of day, location or other triggers. Photograph: Samuel Gibbs for the Guardian

Siri tracks your usage and learns when you might want an app or to contact a particular person. Perhaps you call your mum every Sunday at 1600, or use Google Maps on your commute home.

It should be able to scan your email and pull up flight details, warn of traffic delays on a commute or show things from your calendar, but I haven’t flown anywhere recently so can’t comment on whether it actually works.

In practice, I found Proactive to always suggest the Mail, Settings, Twitter and App Store apps – obviously I use them a lot. Showing me the Music app when I plug in a set of headphones was vaguely useful. It will likely get better the longer you use it.

Siri also suggests trending news you might want to read, but the headlines it promotes are only pulled from a few sources and I didn’t find them particularly useful. Once Apple News launches in the UK, which it hasn’t yet, it might improve.

Compared to Google Now on an Android phone, Proactive isn’t quite there. But it is better than Google Now on the iPhone purely because it’s baked in and isn’t restricted to being an app.

One thing to note is that Apple professes to do all this without sending your data away – unless you use Siri to ask for something – where as Google Now and Microsoft’s Cortana are powered through the cloud, tracking your movements and all the data privacy implications that may or may not have. This won’t matter much to most people, but for those it does, it’ll matter a lot.

My interactions with Siri in general seemed improved. I still find it awkward, as a Briton, talking to an inanimate object. Beyond setting alarms and trying to get it to play music while in the car, you can at least instruct Siri to “Google” things for you, or “Yahoo” if you prefer, which opens in Safari. The default “search for” command uses Bing.

Spotlight can also search within apps, but requires the apps to support it, which they don’t have just yet. That will improve as apps get updated. 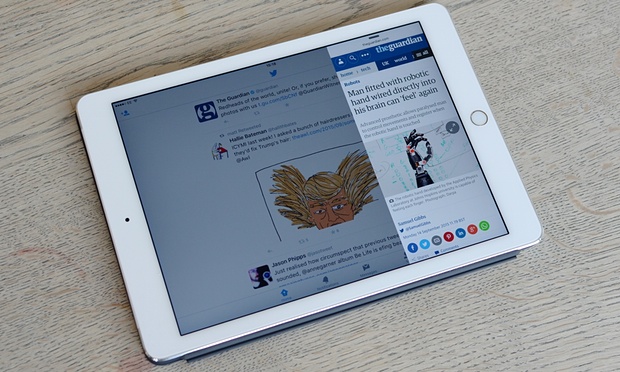 The big change in iOS 9 for the iPad is the introduction of true multitasking. All iPads from the iPad Air and iPad Mini 2 and up will get “Picture in Picture”, which displays video as an overlay. Handy, but common to TVs since the 1990s.

Slide Over also allows quick access to another app such as Twitter while in Safari, for instance. It slides over from the right and sits there until you’re done using it and go back to the app it is partially covering.

On the iPad Air 2, and the forthcoming iPad Mini 4 or iPad Pro only, Split View places two active apps side-by-side on one screen. Each app can be given more or less of the screen with a slider in the middle. It works precisely like Windows 8’s side-by-side app view or Samsung’s multi-window – handy for when you’re trying to watch a live blog or stream and want to keep an eye on Twitter, for instance.

Apple promised better battery life with iOS 9. I’ve barely noticed any change, but at least it isn’t worse. A low power mode is available, which claims to add three hours to the battery life by shutting off push and email fetching, automatic downloads and reducing the performance of the processor, but seemed to do little when I activated it when low on battery. Your milage may vary. 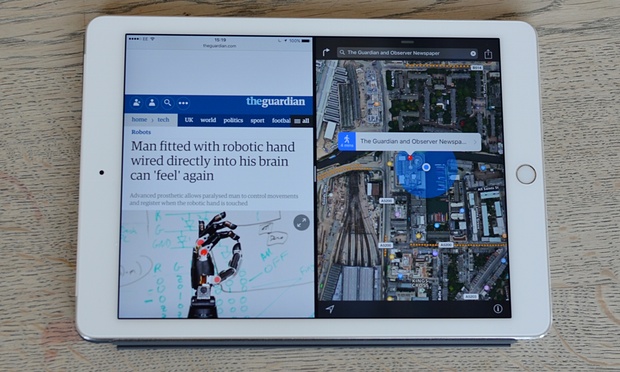 Split View offers true multitasking, with both apps visible and active on one screen. Photograph: Samuel Gibbs for the Guardian

It’s a free update, runs on any Apple iPhone or iPad currently running iOS 8 and legions of people are going to install it. Thankfully iOS 9 is as fast and works as well on an iPhone 6 Plus and iPad Air 2 as iOS 8. Whether that’s the case on an iPhone 4S or 5 remains to be seen.

Is it the best iOS yet? Yes. Could Apple have done more? Absolutely. Notifications still aren’t cleared from Notification Centre when they are within apps and you still can’t clear all notifications in one go; push notifications still only deliver the alert and not always the actual message, which is infuriating in signal-poor environments, and you’re still forced into the Settings app to change simple things too frequently.

Its new features have appeared elsewhere before – from Windows to Android – but it is probably worth updating for the keyboard and multitasking alone, just don’t expect a revolution.

The iOS 9 update will be released on 16 September and while optional, will start to be required by some apps in the near future. 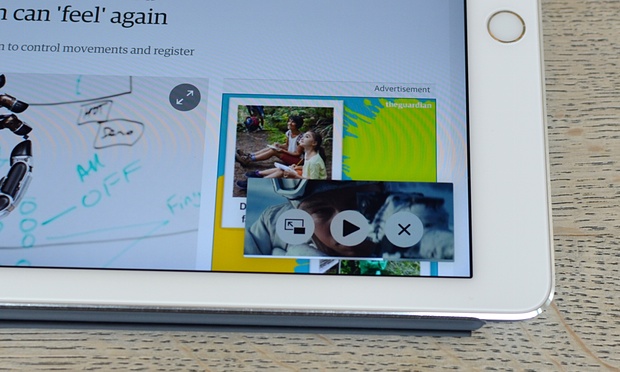 Picture in picture allows users to keep watching a show or movie while doing work, perfect for the cricket or the next World Cup. Photograph: Samuel Gibbs for the Guardian