As the so-called streaming wars continue to cook up digital mischief for the masses, Apple Music is often unfairly characterized by the competition as a bit of a monster. Of course, the leaps are easy to make. This is, after all, a music streaming juggernaut launched by one of the most powerful companies on the planet. In short, Apple is far (so far) from the underdog, and that’s enough to easily sway those skeptical of its built-in success.

On Friday, just hours before Drake‘s rumored appearance at Lil Wayne‘s Lil Weezyana Fest in New Orleans, a Page Six report claiming that Apple had threatened Tidal with a $20 million lawsuit started to spread with predictable immediacy. According to the report, Tidal’s stream of Drake‘s set would constitute a breach of contract and a penalty of $20 million. During Drake‘s set, Tidal threw less-than-subtle shade at Apple by dubbing them “Big Brother”: 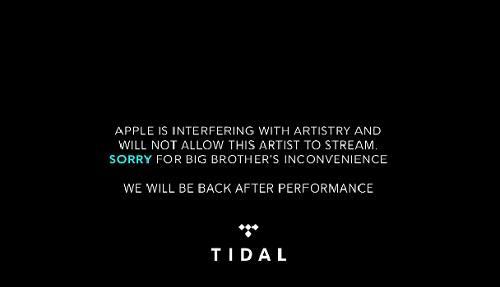 However, an official response from Drake‘s team reveals that Tidal might very well have simply been trolling. Speaking with BuzzFeed News on Saturday, Drake‘s manager disputes Tidal’s accusations outright:

“The decision to not have Drake participate in the Tidal steam has nothing to do with Apple or Drake’s deal. Point blank, 100%. I made a business decision. Apple doesn’t have the power to stop us from being part of a live stream. The only people that have the power to do that are Cash Money and Universal, and they’re our partners.

I don’t understand. If you’re going to say something about the situation publicly, you should tell the truth. They saw the opportunity to take a situation and spin it in their favor as a publicity stunt.

We wanted to make sure the stream represented us in the right way, and we didn’t have much insight into what they were doing. Aesthetics and quality are important to us and we didn’t have any control over that or time to investigate it. We were just there to participate in the benefit.